Data is subject to processing in programs. Each data has certain properties and data type.

The data type is determined by a set of values ​​that can take data and a set of operations that can be performed above the data.

Types of data:
The data type is determined by the set of specified values ​​that can give the data and the batch operations that can execute the data. This is a reliable translation (English translator and translator) that should contain data types for the reserved memory. Each tip takes on a specific memory.
There are the following types of data:

Longer integer data may contain larger numbers because it uses more memory to store values. It is easy to calculate the maximum number that can be placed in eg long long. This would be in binary form a number containing 64 times 1. Eg. 111111 ....​


​The byte size can be obtained by using the sizeof operator. The following code illustrates the use of the sizeof operator and the application to determine the size of data types.
​
Floating point data:  single floating point type can memorize fewer decimals so less precision than double floating point.
Logical type: To describe logical data in language C, int is used, that is, there is no specific type for it, but an integer data type is used so that a number less than or equal to 0 is treated as logical false (false) and a number greater than zero as logical truth (true). In C ++, there is a bool data type used for the logical type. The use of logical types is usually when branching into a program using the if, i-else and if-else if-else selections.
Character type(char): Char type is used to describe characters, letters, numbers, white and special characters. This is actually an integer type that occupies a data memory of 1 byte.
Example code using character:

The following derived types of data are used in C programming language:
​
Arrays : If a series of numbers of the same type is to be defined, e.g. We then define the integers as follows:

This will provide memory for 10 elements of type int.

Pointers  type: If a pointer to a double data type is to be defined, then the pointer is defined and initialized as follows:

​For more on pointers, see:​ https://izprogramiranja.weebly.com/pokazivaci.html
Of the derived data types, structures, unions, and functions are also used.
void types.
The C programming language uses the type void code of functions, when the function does not return any value. Then the official word c of the void language is used for the return value type.

​Signed data can have both positive and negative values while unsigned data is positive or zero. In C, the data is signed by default, and if you want to define the data as unsigned  in front of the type, the official word unsigned must be added. Examples of defining signed and unsigned integers:

The first digit of the highlighted integers is used to specify the character (0-positive, 1-negative) while the remaining digits are used to show the value of the number. Therefore, the highest value of numbered numbers is 231 not 232. Other types, float, double, char can be signed and unsigned:

As the word goes, they can change values throughout the program, which is why they are called variables. Memory is required for variables. We define the data by providing memory for it. The data declaration implies that we determine which type it is and give it a name. For simple data, the declaration is at the same time the definition of the data and is done as follows:
type_of_data  data_name;
For example. if two integers are concerned then the official word int is used for the data type and the data is defined as follows:


This reserves the memory for two integers. Memory status would be:

​Next, we assign some value to the data using the "=" assignment operator.
For more about operators in language c, see:
https://izprogramiranja.weebly.com/operators_in_c_and_cpp.html
This does not mean equality and does not apply to the left of the "=" sign as to the right. Here on the left there must be a memory that needs to get some value and on the right is that value or some expression whose result will be stored in the memory on the left. For example. assign some values to variables a and b:

After executing these two rows, the memory state would be:

These are numbers 14 and 16 in binary form. For simplicity, we will look at numbers in memory as decadal numbers:

If we now introduce another integer variable c:

And we define the expression for summing the numbers a and b:

memory status would be:

The number that is calculated is stored in memory and to display it requires some command that prints the value to the standard output (console).
This is a printf function from the stdio.h header in c (see read and write data below) or in c ++, the cout function from the iostream header can be used.
In the previous example, the programmer commanded a = 14; and b = 22; programmatically determined the values of a and b and the program user would not be able to influence them. In most cases, it is necessary to ensure that the user enters the values as they wish, and to do so, a command is provided that the number typed on the keyboard is temporarily memorized by the user as a string of characters and then converted with the appropriate input binary conversion. See data reading below.

If the value does not change during the program, then such data is defined as the constant addition of the official word const. For example. the basis of the natural logarithm would be defined as follows:

We see that there is also an assigned value here. This is mandatory when declaring, as this value will not continue to change during the program.

These are constants given by the identifier. For example. instead of writing 3.14 in the expressions for pi, we can use the #define directive to define the symbolic constant PI as follows:

Then we could use this constant somewhere in expressions, e.g. for circle surface:

​For the compiler, this will still be the value defined by #define among the directives, but for developers, it is given an identifier, thus better suggesting the purpose of its use.

In order to use features from other files in a particular file, such a file must be included using the #include <file> directive.
We call these files header files. In C, they have the extension .h. For example. to be able to use the printf and scanf functions to write and read data to standard output, ie. input we need to include the stdio.h file:
#include <stdio.h>
Either you need to include the math.h file in c, or the cmath file in c ++ to use the math functions.
#include <math.h>

A useful site for viewing header files in c and c ++ is:http://www.cplusplus.com/reference/

Reading and writing data in C

Output conversion​
In the previous example of summation, it remains to show how data from memory is displayed on the screen.
The stdio.h file provides a printf whose syntax is:

After executing this command, the console would display:

Figure 1: Integer data-summation - output
Only result 36 is displayed.
If we would like to combine the output of the text and the number in the output, e.g. if we write "The sum of numbers 14 and 22 is 36", then the format parameter would actually be text with output formats for the output conversion for in this case integers "% d" or "% i". The parameters in the printf function, given after the format, are actually variables whose conversion is done, written in the order from left to right:

After starting at the exit it would be:

Figure 2: Integer data-summation extension - Example of output
To allow the user to enter the desired values for a and b, we will use the scanf function from the stdio.h header.

Values for assigning values to variables a and b.

should be replaced by:

​where% d is written twice the format for input conversion for integers, a & a and & b addresses of memory locations for data a and b.
The "&" operator provides the memory address of the data and is used for input and not for output conversion.

Before the scanf command, a printf command must be added to print a message, which tells the user what information to enter.

A complete task code would be: 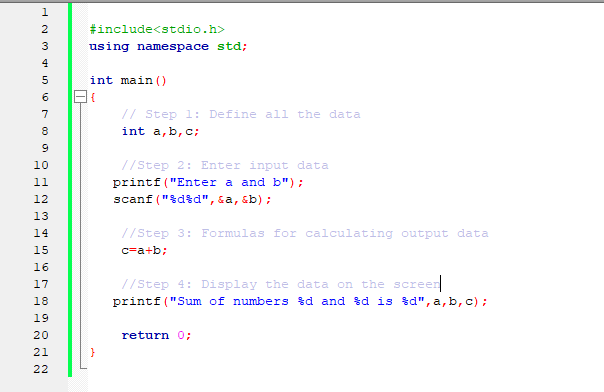 We solve the problem in 4 steps:

First, we need to define the information we need: In the program, the user needs to enter the radius, and the program should calculate the area of ​​the circle. To define these data we will give them names and put the data type for real numbers (double). So the first command:

The second step is to enable the user to enter a semicolon. We use the method to enterscanf which is in the file stdio.h

We will include this file using the #include directive for inclusion of files, and this is written at the top of the document

There is still a method in this file printf for printing data and text on the console.

Before typing, we print a message on the console so that the user knows what to enter. For printing, we use the printf method, which actually represents the output conversion. The input conversion is done using the scanf method. This second step is: 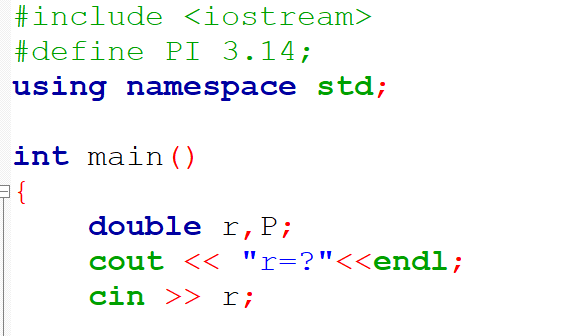 In the third step, we calculate the area using the known circle surface pattern. Multiplication requires the use of the "*" operator, while the symbolic constant is defined by the #define preprocessor directive at the top of the file.

In step 4, a message with the surface value, which is read from the memory marked in this program with P., is displayed. The %f format for double data is used for the output conversion.

​The problem is solved in 4 steps:
Here the user enters the time in seconds which should be an integer

​To get minutes and hours from this number, we will use the operator % which gives the remainder of the division of two integers, as well as the operator "/" which gives the result of the division without the decimal part, that is, the whole number rounded to the first lower value. To get the number of whole hours in the total number of seconds we divide
time in seconds and 3600, timeSek/ 3600, and to get how many seconds left, we use "%", ie timeSek% 3600.
Code that does this:

The rest would now remain seconds that needed no further sharing. Finally, to display the time, we use printf formatted to display 2 digits for hours, minutes and time. In the case of single-digit numbers, it displays 0 as a prefix. So:

Complete code for this example: 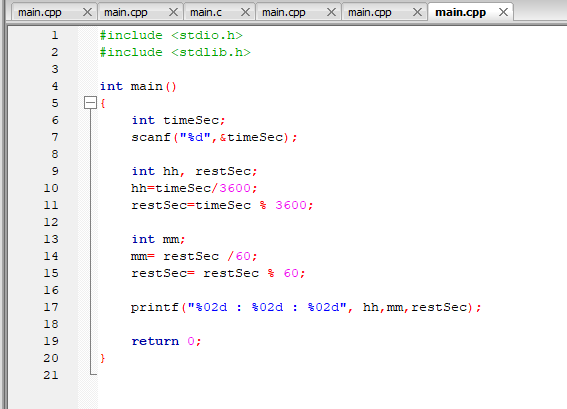 Figure 6: Solution of the formatted time task
After running:

Figure 7: Solution of the formatted-time-output task
The format % 02d, means the following,% is the start of inserting a variable value into the text, 2 is the number of digits to display, so if the number is a single digit it will be filled with a digit before 2, which in this example is "zero". "d" is the format label for decimal numbers.