Programs in the c / c ++ programming language can have a large number of commands, and if they were written one after the other in a single file, developers would find it difficult to navigate in such a code, i.e. it would be difficult to maintain it. On the other hand, it often happens that one algorithm, part of the commands that solves a small or large problem inside an application, repeats itself many times. It can be concluded that it would be much better to extract this set of commands (part of the program) as one whole only once as a subroutine or function, and then call this function as necessary whenever necessary. Subprograms are a mechanism for breaking up complex problems into subproblems.
The programming language C knows only one type of routines called functions.​
​
There are two things to distinguish about functions:

Defining means that these commands that make up the function and who need to specify a specific task in an application (program) are written somewhere in the program, to sort them in some way, give a name and determine which data should be delivered to the function as input parameters and what kind of data the function returns back as a return value. So the definition of a function should include: This can be seen in the following picture. The method (function) is used to calculate the maximum of two integers: 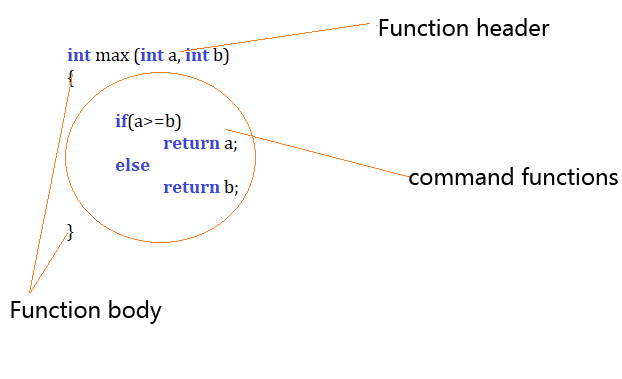 Figure 1: Function definition(metods)
There are two words in the header of the method.
The first, in this case int, is a type of return data. This method, which counts a larger number between two integers, returns that integer type. This is the type of return value.
The second one is the name of the method that the programmer chooses himself and who should suggest the purpose of the method.
The body of the method is represented by curly braces. The body contains function commands.
In the header of the function (s), after the name, the parameters (arguments) of the function are written within ordinary brackets. These are the data to be delivered to the function so that it can complete the task set. In the previous example, the task that the function needs to perform is to determine the maximum between the two integers, and the data that the function needs to deliver through the parameter are the two numbers, in this case marked as a and b. The following figure shows more detailed this method. 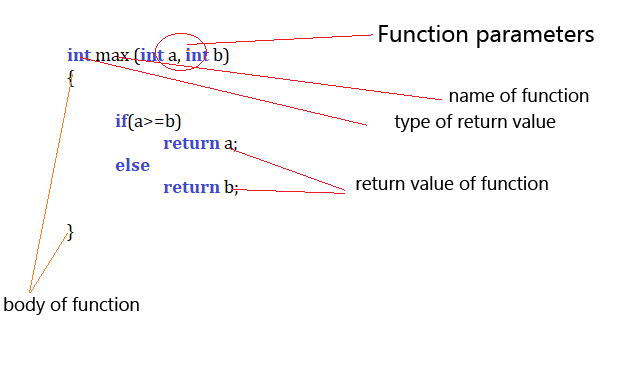 Figure 2: Defining function details
The function parameter can be no one or more. If the function does not require input data then the bracket in the header of the function will remain blank.
If the method does not return the value, it will not have the return statement in the body, but it can only have a return. In this case the word void is written as the type of return value.
The program must have at least one function and this is the main function. An example of the main function of the previous example is shown in the picture below. 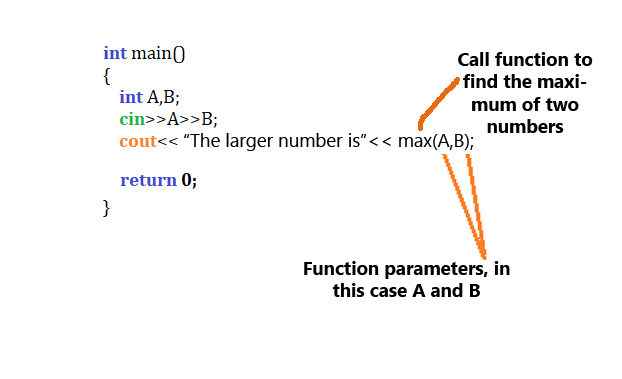 Figure 3: Determining the maximum of two integers-main functions
Within the main function, two integers are loaded first, and then the maximum is determined. Maximizing commands are isolated as a special method called max (see Figure 3). In the main function, use the cout command to print this value. At the point where the print data is expected, there is a call of the max function. Data as A and B are transmitted as parameters, in fact copies of these values. The max function determines a higher value and returns it back as a return value. This vegetable value will be printed along with the text "The larger number is" at the exit. After starting and setting the values ​​eg 5 and 10 for A and B, the output will display: 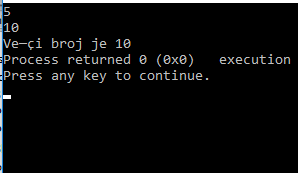 The only feature that is automatically called, when starting the application is the main function. The commands in the main are executed from bottom to bottom and when the last command ends the program ends. If we have defined a function in the project, they will not be done by ourselves. In order for a program from the main to continue execution in another function, one of the commands in the main must be the call of another.
In the example in Figure 3, the max function is called:

The declaration calls methods, in general, it looks like:

​The parameters that are forwarded to the function are copied in order in the parameters defined in the defined method (see Figure 2). In the definition of a method, a data type is placed in front of the parameter name.

int max(int a, int b)
​In fact, a new memory marked with a and b, which receives copies of the parameter values ​​from the function call, is actually reserved:
max(A , B);
The call does not put the data type in front of the parameter.
Copying a parameter is shown in Figure 5. 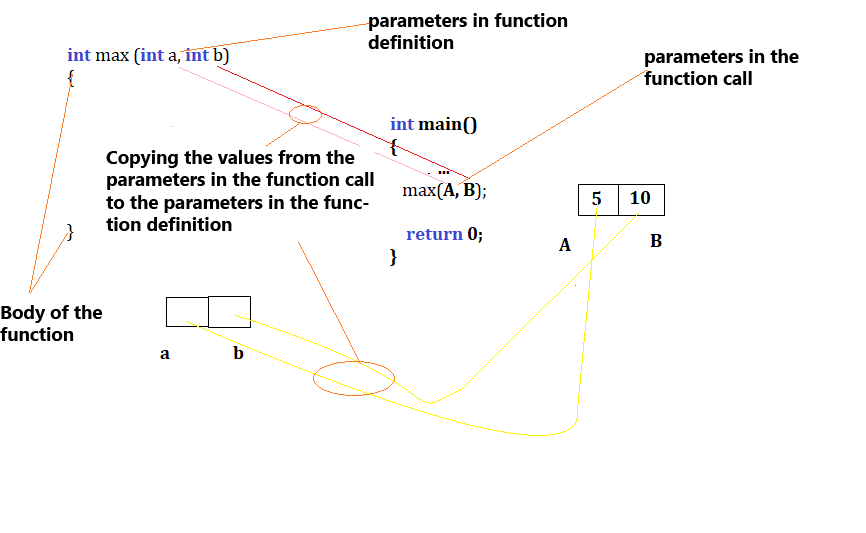 Figure 5: Forwarding the parameter function to a max schematic view

Forwarding a parameter by value and by reference

In the previous example, the parameter is forwarded by value. Since the parameters in the second function represent a new memory that obtains copies of the values ​​from the memory of the main function only, any possible change in values ​​within the other function will not affect the data defined in the first one.
This can be illustrated by the following example:

Set the integer value to 20, then make a method that changes this value to 100.
Let's create a function that will change the value of the data sent to: 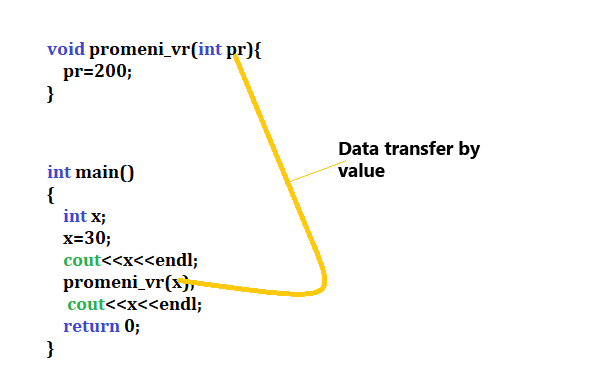 Figure 6: Example "data value replacement" - by value
When we launch this program at the exit we get

Figure 7: Example "Data Value Replacement" - output
We see that in the main function this value has not changed and if at first glance it seems that the code is all right.
This value is changed within the function change_vr, but this change does not reflect the data in the main function.
In order for this to be correct, the parameters must be transmitted by reference.

Unlike the transfer by value, when referring to a referral, the new parameter memory in the other "change_ref" function is not made, but these parameters are actually references (the other name) for the same memory occupied by the data parameters in the main function. This will cause changes in parameter values ​​in a second function to reflect on the first. 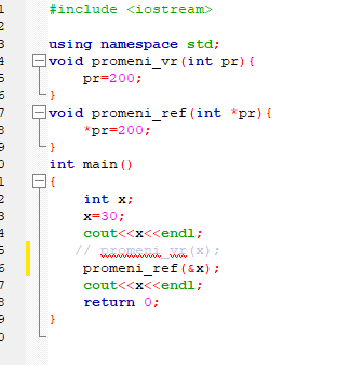