Often, programming requires one command or multiple commands to repeat a number of times. Let's imagine now that we should print out certain orders 100, 1000, or 10000 times. It would be a difficult, almost impossible job. The job would be made easier if these commands, which we want to repeat, were written only once, and with another command repeated.

These commands, for which we allow controlled repetition, are called cycles. In C, the C ++ language is used for, while, and the do-while command.

The terms in a small bracket serve to provide the appropriate number of repetitions, in this case 20.

The first term serves to introduce some variable to which some initial value is assigned and whose value will change during the cycle.
The second term is actually the condition of the loop from which it depends whether it goes to the next cycle or not. This is actually a logical expression whose value is a logical data type of bool, so it can have a value true, if the value of the expression is correct, or false, if it is incorrect. In case the value is true, the next cycle will be executed.
For example. if we introduced the variable "i" and set its initial value to zero in the first expression, and the second expression is <20, it means that the printing will be repeated until the expression is correct. If the variable "i" did not change during the cycle, it would mean that this condition will always be satisfied, which means that it will be infinite cycles (the program is continuously executed).
A third term is required to change the variable. It defines how much the variable that is introduced in the first expression is changed. In our case, i ++ means a change for 1 and an increase.
So, if i is starting at i = 0, increment step 1, and loop condition <20, this means that this condition will be satisfied until the value of the variable "i" reaches a value of 20. So 20 <20 is no longer true and the cycle is interrupted .

The phrase three could be written as i = i + 1. This means that the memory labeled with and assigns a value that was previously in that memory increased by 1.

In general, the syntax for commands would be

Here we see that the commands are covered with curly braces. In the case of only one command brackets can be absent.
Let's look at the following problem:
We want to simulate the change of position with [m] with uniform motion for time change. Hence, visual simulation will not be made, but only the printing of the current position of the body position for each time change for the dt interval.

We will observe the position changes for each small increase of time from dt [s]
Let's take this change for dt = 0.05s

Introduction to cycles-simulation of uniform motion

This code is not good:

We see that 3 commands are repeated 20 times. Instead, you need to write 3 commands one time and then use some other command that will cyclically repeat them as many times as we want.

These are the commands we call cycles (loops):​
The loops (cycles) in JAVI have a very similar syntax for writing commands. Read more in the lesson: Petlje u programskom jeziku JAVA

This command, unlike for the command, is used when we do not know the advance number of the cycle.
Note that in a small bracket, we only have one logical type or logical variable type bool. Commands in the body while the commands will be repeated as long as the term is correct, ie, while the value is true. Since the condition is at the beginning of the loop, it is examined before executing the command. It may happen that in the first test the value of the bool expression is false, which means that in this case, the commands would not be executed at any time.
If, for any reason, it is important for us to execute orders at least one time, then it is more convenient for the condition to be in the end, which is the case with the do-it-on order.

Repeat commands while the bracketing condition is satisfied
while( true )
{
COMANDS
}


Example: Enter the integer N. Remove the zero from the right. For example. for entering N = 12000, the input should be 12

This task is suitable for the application of the cycle. Zero removal will be done by dividing by 10 times as long as the transformation number is divisible by 10. We do not know how many times this will be the path because it is not known in advance for entering the number. So it is not suitable for, but while the cycle where the execution will cyclically repeat until the delimitation condition is satisfied, the remainder of division N and number 10 is zero:
int N;
cin >> N; //Loading the whole number

For more information on loading numbers using the cinch command, read the lesson  strings in C/C++.
Read more about determining the rest of the sharing in the lesson operators in C/C++.

Text: Enter the initial body height and make a free fall simulation by printing time, instantaneous speed and current height on each 0.05s 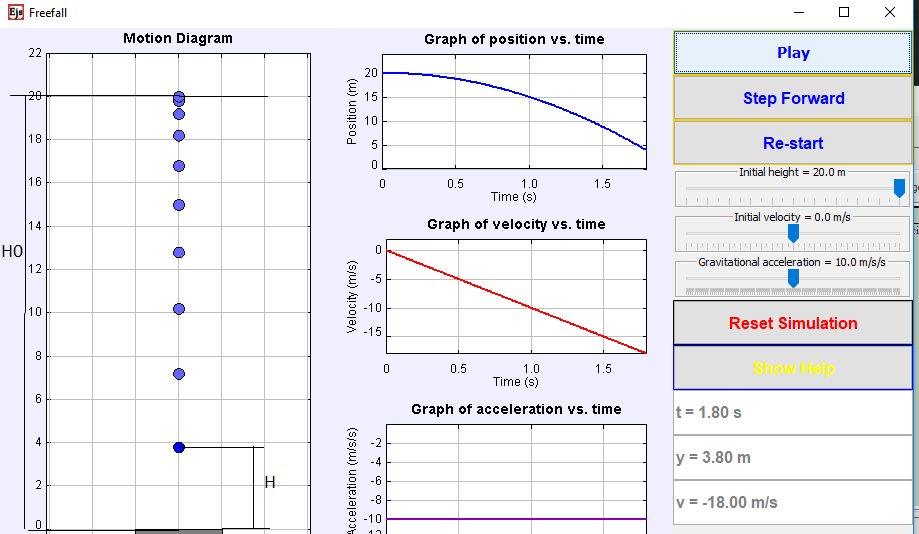 We see various body positions after each dt = 0.05s.
During this time, the height h and the velocity v are changed.
​In the previous example: Simulation of free fall is preferable to use while the loop. In each cycle there is a change in time, current body height and current body speed. The cycle is repeated until the height is greater than zero, i.e. until the body falls to the ground.
double h;
cin >> h;
while(h>=0)
{
t=t+dt; //time change for 0.05s

The previous example could be done with do-while if you knew the initial conditions before we entered the cycle, e.g.
if we know it is safe h0> 0 and
Initial conditions:
h = h0; t = 0;
then it would look like:

Repeat commands while the bracketing condition is satisfied
do
{
t=t+dt; //time change for 0.05s

If the initial h was zero, then this method does not make sense because an iteration that does not have to be done is done, since the body is already on the ground.
If we know it is safe h0> 0
Then the condition is set in the end, so we use the do-while command.

Repeat commands while the bracketing condition is satisfied
do
{
COMMANDS
}
while( true );